“He’s a massive dude,” Brockers said, as he began to chuckle. “At first, I was like, ‘Yeah, that’s the guy that they’ve got to replace me.’ Then, I saw him at outside linebacker and I was like, ‘What? What’s up!'”

The Rams selected nine players in the NFL draft last April. Despite no first-round pick, several rookies have made quick impressions — and are vying for big roles — after only a week of training camp practices and a scrimmage at SoFi Stadium. 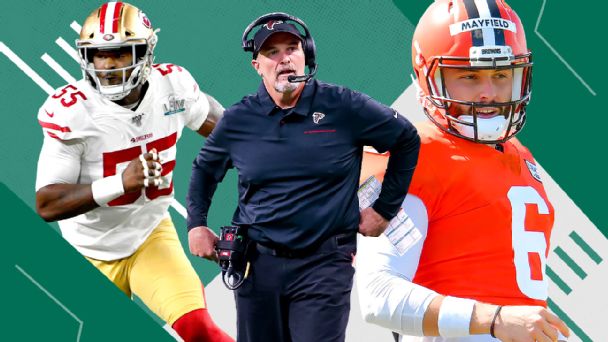 “When you look at those guys that we’re really counting on to contribute from that draft class, we’ve been very pleased,” Rams coach Sean McVay said. “They got a long way to go but they’re certainly doing things the right way.”

A third-round pick from Alabama, Lewis spent most of the acclimation period at home after he tested positive for the novel coronavirus.

“Mentally, it was more bumming than physically,” Lewis said of his experience with COVID-19.

Since arriving at practices, Lewis has joined an outside linebacker rotation that includes projected starters Samson Ebukam and Leonard Floyd, as well as Ogbonnia Okoronkwo, Natrez Patrick and Jachai Polite.

“He’s everything and then some more,” Ebukam said about Lewis, emphasizing his length and other physical attributes.

“He’s looked good the last three days in practice and has got a long way to go,” McVay added. “But, you definitely see the flashes.”

The Rams went offense with their first two picks, selecting Akers and Jefferson in the second round with the No. 52 and No. 57 overall picks, respectively, to help replace running back Todd Gurley II and receiver Brandin Cooks.

“He’s really smart, willing to learn, willing to listen and has done a great job up until this point,” quarterback Jared Goff said about Akers, who had an eventful first week in pads. Ramsey delivered Akers a welcome-to-the-NFL type hit during practice, then defensive tackle Aaron Donald stripped the ball from the rookie during a scrimmage.

“He’s got great natural ability as a runner, he sees things, he’s got a great feel and tempo to his game,” McVay said. “But, you’ve got to make sure how important [ball security] is and I think he’s really been mindful of that.”

Akers’ opportunity is expected to increase following Saturday’s scrimmage, as Henderson suffered a hamstring injury that will temporarily sideline him and allow Akers more first-team repetitions.

“He’s picking it up fairly quickly,” Goff said. “There’s a lot of stuff that we do put on running backs and asking him a lot and he’s doing a good job.”

The son of New York Jets receivers coach Shawn Jefferson, Van Jefferson appears to be on the fast track to earn a significant role. He flashed throughout his first week of practices, catching passes from backup quarterback John Wolford — including one deep over his shoulder on Day 1 in pads — and Goff.

Jefferson capped the week catching a touchdown pass in the back corner of the end zone at SoFi Stadium from Wolford, then took reps with Goff and the starters during the second half of the two-hour scrimmage.

“He’s a guy that’s continued to show up, wanted to be able to see him in a bunch of different capacities inside, outside,” McVay said, explaining the decision to play Jefferson with the starters during the scrimmage. “He’s picking things up quickly.”

Receiver Cooper Kupp, who Jefferson has been compared to, said the rookie’s football acumen has been apparent.

On defense, Burgess and Fuller have made early impressions in the secondary.

With safety Taylor Rapp sidelined because of a knee injury, Burgess, a third-round pick from Utah, has played with the starters alongside Johnson. On his first day in pads, Burgess picked off a pass that Goff threw deep, intending for receiver Robert Woods.

“Smart player, great athleticism for a safety,” McVay said. “He has some flexibility to be able to play at the nickel position at the star for us. Really, very conscientious, made some big plays. When he gets his hands on the ball, he’s catching it. That’s one of the things I’ve been really impressed with.”

A sixth-round selection from Ohio State, Fuller drew excitement from teammates and coaches on the sideline after he sprinted from the middle of the field to the far sideline to break up a deep pass by Wolford.

“These guys were high football IQ guys, great character, really smart, had all those intangibles that enable you to seamless step in and do a great job,” McVay said about the young safeties. “Those are guys we’re definitely counting on this year.”

‘I Hated Working for a Living’