Matt Doherty plays as a right wing-back for Wolves but he interprets that position in an unusual way.

He does not just hug the touchline and provide width but acts as a genuine penalty box threat. Freeze the frame and he can appear to be Raul Jimenez’s strike partner at times. Doherty is reinventing the role. He is Wolves’ defender-turned-poacher extraordinaire.

This is not news to any fantasy football aficionado. Doherty has scored eight goals for club and country in each of the past two seasons – numbers that owe little to good fortune and lots to the Republic of Ireland international’s ability to raid forward from the right flank.

In fact, four Premier League goals was a slightly underwhelming return last term given his threat. Doherty’s expected goals tally, based on quality of chances, was closer to seven. That was more than every Wolves midfielder combined. He was almost twice as likely to score as Adama Traore – the man ahead of him in the line-up graphic but rarely so on the pitch itself.

The key to Doherty’s success is his willingness to drive into the box like no other so-called defender in the Premier League. He has had over 200 touches in the opposition area over the past two seasons. Among defenders, that puts him out on his own, but it is rarefied air regardless. Doherty has had more touches in the box than Kevin De Bruyne in that time.

For Wolves, in particular, the importance of his appetite to push forwards cannot be overstated given their otherwise rigid structure. Joao Moutinho and Ruben Neves rarely make it that high up the pitch. Traore prefers to stay wide to isolate the full-back. It is essential for Nuno Espirito Santo’s system that Doherty provides that option in the box.

Consider Daniel Podence’s opening goal against Crystal Palace in Wolves’ final home game of last season. Much of the focus in the immediate aftermath was on Moutinho’s exquisite lofted pass through to Doherty that set up the goal. But the ball could not happen without the run from the 28-year-old Irishman – expertly timed to break the defensive line.

Watch Wolves regularly and it is noticeable how often the ball does not come. Doherty, head bowed, returns to his position with that languid stride of his and prepares to go again. It is a routine more akin to that of a striker trying to beat the offside trap than a wing-back.

He summed up his thought process in a recent interview in which he discussed his 94th-minute winner at Newcastle in 2018. “It was the last minute of the game, give it one more run and see what happens. If it came out and I wasn’t there, I would have regretted it.”

Doherty had his reward again in the closing stages of the dramatic win over Manchester City in December. Again, it was the final moments of the match. Again, it was Doherty with the decisive impact, rushing forward to score. At the moment that he struck the ball left-footed into the net, he was Wolves’ most advanced player – the only one inside the penalty box.

He is not the only wide defender in the Premier League with a pivotal attacking role to play but, as the numbers suggest, his is unique. The principle offensive threat provided by Liverpool’s Trent Alexander-Arnold and Andrew Robertson is from their crossing. Doherty makes underlapping runs instead. He is less of a creator, much more of a goal poacher.

Examine his shot locations since Wolves returned to the Premier League and they help to tell the tale. There are some impressive finishes in there but the most obvious point is that there have been plenty of tap-ins too. The opportunities that come to those who find themselves in the right place at the right time.

His equaliser at Tottenham in March was a prime example. Japhet Tanganga’s clearance from Ruben Vinagre’s low left-wing cross was a poor one, but who was there to slot home from six yards out? Doherty had little right to be there. It was a counter-attack. But there he was, nevertheless.

It is natural to wonder how much of that skill is learned and how much of it is down to Doherty’s own instincts. “He never says no to a challenge,” says Nuno. But is this just a man exploiting his licence to attack or is there an innate ability to sense where the ball will drop?

Perhaps the best clue to the answer comes on the other wing for Wolves. Jonny Otto and Ruben Vinagre are players with gifts of their own. The former is a tidy and diligent defender, the latter has the tricks to beat his opponent. Neither has the scoring record of Doherty. Neither has been able to find themselves in the positions that their counterpart takes up.

As Wolves reflect on their first two seasons back in the Premier League, thoughts inevitably turn to how they might be able to improve. Given the top-class players elsewhere in the team, there could be a temptation to think wing-back offers the potential for an upgrade.

But the three years of work that Nuno has done with Doherty – converting him from the left side of defence, remember – should not be underestimated and would certainly not be quick to replicate. How do Wolves even begin to scout for the replacement?

The relationship that Doherty has forged with Traore has been just as important to the team’s success as the more celebrated one between Traore and Jimenez. His understanding with others such as Conor Coady provides the basis for plenty of Wolves’ build-up play.

The Wolves captain is credited with completing more long-range passes than any other outfield player over the past two seasons, but he needs a target to hit. Doherty is the outlet, making the most of those passes with a sure touch or by competing in the air. It is worth noting that he also won more aerial duels than any other wide defender last season.

“It is not just about me practising the pass,” says Coady. “It is about knowing where your runners are going to be. I have to make sure that I know what run Doc or Adama will do to make sure that the pass lands in their path. Sometimes they can drop back or sometimes they can go forward with it more. Everybody knows their role and how to play it.”

In Doherty’s case, that is especially significant because his role is truly unique right now in the Premier League. Wolves’ wing-back-cum-poacher has made the position his very own.

How would he fit in at Tottenham?

On the face of it, Tottenham might not seem an obvious fit given Jose Mourinho has favoured a nominal back-four for much of his career. However, in practice, his deployment of Serge Aurier as an advanced right-back means that his attacking responsibilities have been more akin to that of a wing-back than a full-back anyway. 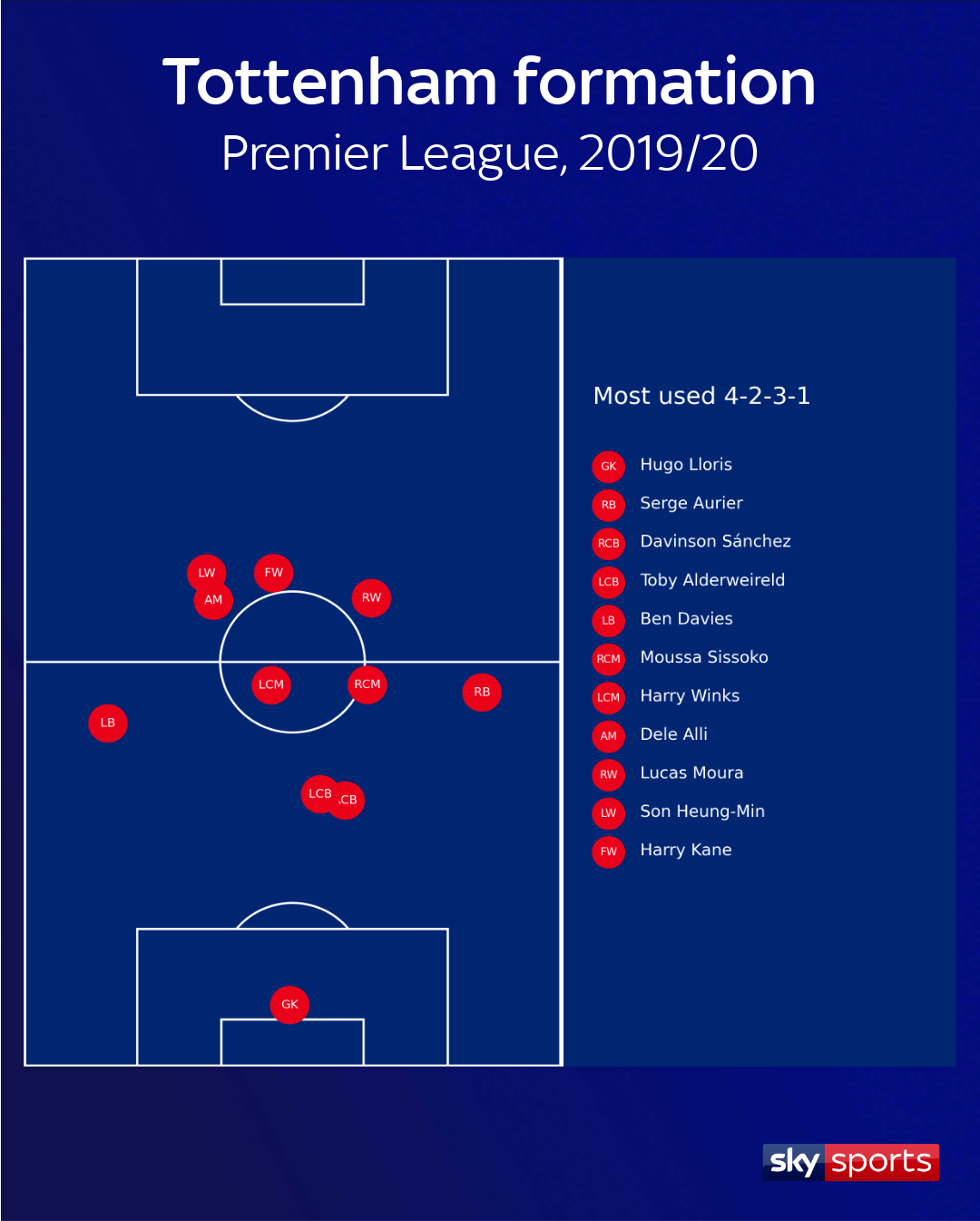 Mourinho has preferred an asymmetrical formation with Ben Davies sweeping to provide greater defensive cover on the left side. This has given Aurier licence to go forward.

The result is that the majority of Tottenham’s openings originate from moves on that right flank. The threat has been high but the end product from Aurier has not always been there.

His effectiveness in that role has been a subject of much debate among Spurs supporters.

The statistics show Aurier he puts in a lot of crosses – the fourth most of any Premier League defender last season, behind only the Liverpool duo and Everton’s Lucas Digne. The statistics also reveal that he has one of the worst cross completion rates of any defender in the competition – failing to find his man with 85.4 per cent of his deliveries into the box.

Aurier actually succeeded in provided more assists than Doherty last season. But there is still the suspicion that another player could have used the time and space more efficiently. Perhaps it is time for another way.

Doherty’s off-the-ball movement and aerial ability in both boxes would appeal to Mourinho. There are prettier players but few in his position who can impact the game quite so much. A move to London in this transfer window would solve a problem for Spurs – and create one for Wolves.

Sky Sports Fantasy Football is back!

Another year, another £50,000 jackpot on the line. Sky Sports Fantasy Football makes its return for the 2020/21 season.