Denny Hamlin survived a post-race investigation to win the NASCAR Cup Series Playoff race at Talladega, edging out Matt DiBenedetto in a photo-finish during the third period of overtime.

A big accident on 187 of a scheduled 188 involving points leader Kevin Harvick, Kyle Busch, Martin Truex Jr and Alex Bowman brought out the second red flag period of the race and sent it to overtime.

The second period was then abandoned after Bubba Wallace (RPM Ford) spun into the wall after contact with Ryan Preece (JTG Daugherty Chevrolet) and collected Ryan Blaney’s Penske Ford in the ensuing melee.

A Talladega-record 13th caution period once again neutralised the race as DiBenedetto, Chris Buescher and Chase Elliott all desperately tried to save enough fuel until the pitlane was opened.

When the race restarted for the final time with a two-lap shootout, Buescher’s Roush Fenway Racing Ford got in behind DiBenedetto’s Wood Brothers Racing machine, with the duo dropping the rest of the field on lap 199.

However, William Byron’s Hendrick Chevrolet managed to get between the two at the start of the final tour of the 2.6-mile superspeedway, allowing Erik Jones (Joe Gibbs Racing Toyota) to slot into second behind DiBenedetto, with Buescher, Byron and Hamlin (JGR) leading the pursuing pack.

The leading pair were caught at Turn 3, where Jones moved up the track to block Buescher and was sent high into the wall.

DiBenedetto then moved low to block Byron’s run, resulting in contact that forced the Hendrick driver sideways while behind, the fast-catching Hamlin was forced onto the apron below the track limits line by Buescher.

Byron gathered his car together and ran side-by-side with Hamlin until a late run from the recovering DiBenedetto and Jones on the high line lost him momentum, as Hamlin took the flag first in a photo finish, just 0.023s ahead of DiBenedetto.

NASCAR investigated Hamlin for the incident in which he went below the yellow line, but cleared him of any wrongdoing, securing his place in the next segment of the Playoffs.

However, it did hand penalties to DiBenedetto (for forcing Byron below the line) and sixth-place on the road finisher Elliott (for improving position while out of track limits on the run to the flag) – both dropping to the rear of the cars that finished on the lead lap.

DiBenedetto’s penalty elevated Jones to second and Dillon to third from Byron, but Elliott’s team succeeded in having his penalty overturned and Buescher punished for forcing him out of track limits.

Brennan Poole took a maiden career top 10 finish with ninth for his Premium Motorsports #15 Chevrolet Camaro, ahead of Preece who rounded out the top 10.

Brad Keselowski (Penske) was caught up in a spin on the final lap and dropped to 18th, while Harvick’s repaired Stewart-Haas Ford trailed home 20th – the worst result for the regular season champion since a 26th at Homestead. 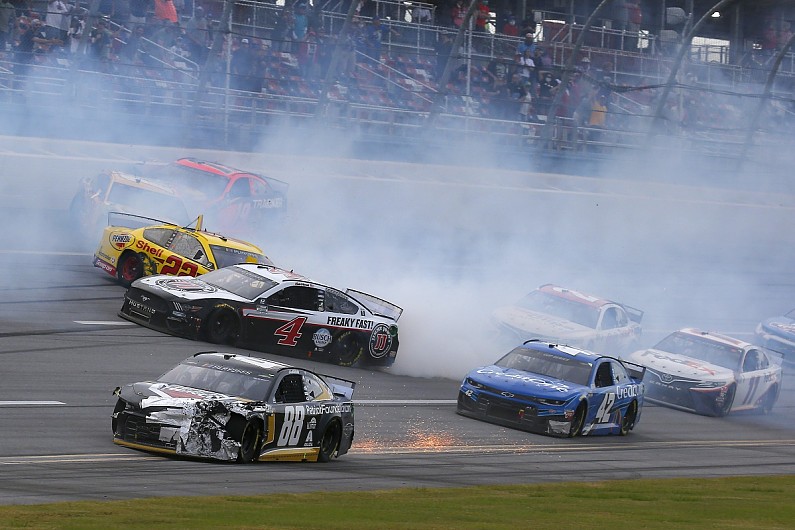 Blaney, Joey Logano (Penske) and reigning champion Kyle Busch (JGR) all failed to add decent points to their tallies by virtue of being caught up in accidents throughout the race, meaning Logano and Busch must win at Charlotte next week to be assured of their place in the next Playoff round.

In his final superspeedway race before retirement from NASCAR, Jimmie Johnson helped to trigger a big crash on lap 109 after being tapped by Clint Bowyer, which led to the first red flag being waved.

Superspeedway-only driver Brendan Gaughan was one of the victims of the lap 109 pile-up – the retiring #62 Beard Motorsports driver’s final Cup race ending prematurely as a result.

How the 2020 postseason teams were built

Butler: 'I don't view us as underdogs'

Butler: 'I don't view us as underdogs'

Member of the Month: August

The Rest Of The 2021 NASCAR Season