Philadelphia Eagles left tackle Jordan Mailata was given a day’s notice that he would be making his first start on Sunday Night Football at the San Francisco 49ers — not just his first start in the pros, but ever as a football player.

Future Pro Football Hall of Famer Jason Peters had a toe injury crop up on Friday and was promptly placed on injured reserve following an MRI. When Mailata walked into the building Saturday, he was told the responsibility of protecting quarterback Carson Wentz‘s blind side was his.

A rather nonchalant response given that Mailata, the former Australian rugby player, didn’t know the difference between a first down and touchdown this time three years ago. He acknowledged there were some jitters beneath the surface, but once he made it past the first series, the anxiety dissipated and he “felt like I was at home.”

It was not a perfect performance by any stretch, but Mailata acquitted himself well overall as the Eagles (1-2-1) picked up their first win of the season.

“I thought there were some really good things [Sunday] by him,” said Eagles coach Doug Pederson of the 6-foot-8, 346-pound Mailata. “He’s a big man, obviously; he’s strong. And when he is one hundred percent accurate on what he’s doing on that particular play, it’s hard for defenders to get around him, whether it’s a pass block or a run block, when he’s right.”

That physical prowess — displayed on the rugby pitch where he routinely steamrolled grown men as a member of the South Sydney Rabbitohs — is what got him on the radar of the NFL’s International Player Pathway program, and eventually Eagles offensive line coach Jeff Stoutland.

Mailata, 23, was selected to train at IMG Academy in Bradenton, Florida in January 2018. He was raw as could be — “[he] didn’t know how to put a helmet on, let alone take a helmet off,” said IMG coach Paul Dunn, recalling a humorous moment when Mailata and another foreign player tried to drink Gatorade through their helmets and had it splash all over them. But he showed enough improvement over the ensuing weeks to attract NFL teams, including the Eagles, who traded up in the seventh round that April to select Mailata. 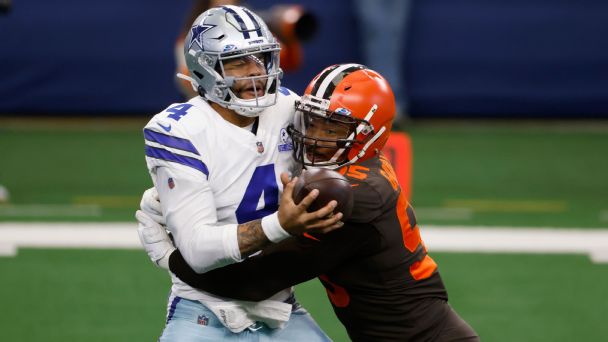 • NFC East is 3-12-1 – A fix for each team
• Fantasy fallout: Any hope for these players?
• Browns can still dominate without Chubb
• Burrow’s comfort key to early success
• Cardinals’ Jones nearing 100 sacks

Even though he has been playing the sport for a very short time, patience was running a bit thin among the Philadelphia fan base when it came to the Mailata experiment. He was shelved last season with a back injury and had some rough moments at training camp this summer, furthering doubts about whether he was going to turn into a contributor. The Eagles didn’t seem all that anxious to play him, as it took injuries to Andre Dillard, the team’s 2019 first-round pick, and the 38-year-old Peters before Mailata got his shot.

The inexperience showed Sunday night — he committed a false start on a third-and-1 that stalled a promising drive — but so did the ability, as Mailata demonstrated his power and athleticism on a number of clean, effective snaps. Mailata has not allowed a sack in 82 snaps this season.

“He’s still a work in progress; he’s still like a ball of clay that we’re shaping and molding and making into a left tackle,” Pederson said.

With Dillard and Peters on IR, Mailata will have more time to prove himself, including Sunday at the Pittsburgh Steelers (1 p.m. ET, Fox). He made clear he intends on being more than a place-holder until Peters gets healthy.

“I’m not trying to fill anyone’s boots. I’m trying to make my own boots,” he said. “That’s the one thing I came here to do: try and put some respect on my name, and tell people that I’m not a rugby player anymore. I’m a footballer.”

3 2020 NBA Draft prospects who can help right away

NASCAR returns to track this weekend at Watkins Glen