SportsPulse: To the surprise of many, the Miami Heat will not be swept by the Los Angeles Lakers and that’s in large part because of the massive effort by Jimmy Butler in Game 3 who finished with a triple-double.

It was nothing but joy. The Miami Heat were on the verge of advancing to the NBA Finals and Butler and Dragic laughed about their friendship – a Slovenian and a Texan – and joked about Butler’s Big Face Coffee shop inside the bubble.

“I feel great,” Dragic told USA TODAY Sports. “I finally feel my body is healthy from when I battled with that knee injury last season, and it takes time to come back.

“Every game, every day, every minute, every practice, I really enjoy because, I’m honest, you never know when it’s going to be your last game. I want to enjoy every moment with this team.”

An injury sapped that joy. Dragic, the 34-year-old point guard, tore the plantar fascia in his left foot in the second quarter of Game 1 and hasn’t played since. 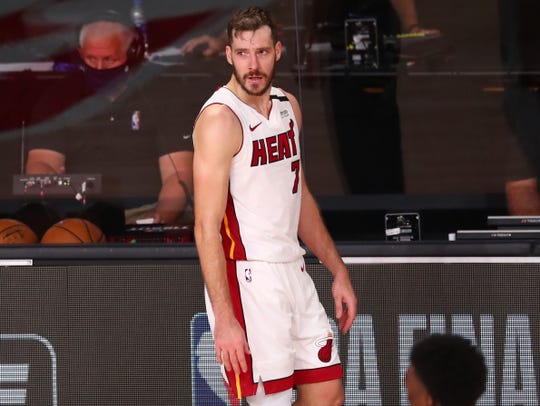 “It’s not the easiest thing for me right now to sit on the sideline and watch my team – how they’re battling, how they’re playing well – and of course I want to be out there,” Dragic said Monday. “Most of the times I ask myself, I ask the guy above us why it has to happen right now. It’s tough. Try to look at this way: everything is with a purpose, so we’ll see.”

There is no timetable for Dragic’s return, but the disappointment in his voice is telling. Even though he is undergoing treatment on his foot around the clock, his return in this series seems unlikely.

The average time missed for a torn plantar fascia is about 13 games, according to athletic trainer Jeff Stotts, who tracks NBA injuries in a database.

The pain in Dragic’s voice matched that in his foot.

“I want to be out there with my team. That’s no secret,” Dragic said. “That’s what I was working my whole career for 12 years in the NBA.”

Before Luka Doncic entered the NBA, Dragic was the NBA’s biggest Slovenian star. He played for Phoenix (two stints) and Houston before finding a home with Miami in 2015. Dragic made his first All-Star team in 2018.

“When we made that midseason trade for Goran, we made a promise to him that we would be competing for titles,” Heat coach Erik Spoelstra said.

It took the Heat and Dragic longer to get there than anticipated. He was a starter for most of the past eight seasons, but Spoelstra wanted Dragic to come off the bench this season. It was a role that required adapting.

“But I tried to take that anger and flip it to a positive way. I said to myself, ‘I cannot change that. Control what you can control. I’m going to come from the bench and win Sixth Man of the Year and help the team.’ That help me change my mindset.”

Dragic finished sixth in the Sixth Man of the Year award voting, averaging 16.2 points and 5.1 assists. He was excellent in the playoffs, too, as the Heat beat Indiana, Milwaukee and Boston. Along with Jimmy Butler and Bam Adebayo, who is also injured and trying to return for Game 4, he was one of Miami’s top-three players. He averaged 19.9 points and shot 45% from the field and 35.9% on 3-pointers in the postseason.

His ability to score inside and outside and find open shooters gave Miami another creative angle to its offense with Butler and Adebayo.

His loss is significant. It has been difficult on Spoelstra, who compared himself to a parent who had to console a child.

“First and foremost, I want to empathize and show compassion to Goran and Bam,” Spoelstra said. “I meant it when I said it yesterday: I can see it in their soul, through their eyes how much this means to them and how badly they want to get back out here.

“But you have to compartmentalize as a team, and we came here with a purpose and a task at hand, and everybody is just focusing on that. Whoever is available, until, if or when we get those guys back. And even those guys just being in the locker room and in our huddles, that moves the needle in whatever way they can. There is an energy to that. There is a karma to that, and we’ll just see what happens.”