The New York Jets haven’t made too many good decisions over the past few weeks. If they want to do something right for a change, they can start by resting quarterback Sam Darnold on Sunday against the Arizona Cardinals (1 p.m. ET, Fox) to let his shoulder heal.

At 0-4, with a microscopic chance to make the playoffs, the Jets would be prudent to err on the side of caution. Despite a slow start, Darnold’s right arm still is the most valuable limb in the organization. Jets coach Adam Gase and general manager Joe Douglas need to do right by the kid and protect him from himself — and Cardinals pass-rusher Chandler Jones.

On Monday, Darnold made his position clear, saying, “It really does depend on what the doctors say and what they think can happen in the future in terms of further injury or [if] this can be a lingering effect if I hurt it even more. There’s still some discussions that need to be had there. But for me, the most important thing is playing football. … If I’m able to play and I don’t play, that’s worse than anything, in my opinion.”

A tough-minded quarterback and a desperate coach can form a potent cocktail, which can be dangerous. That’s why there must be oversight in a situation like this. This is where Douglas has to step in. Take the ball and give it to backup Joe Flacco for a week.

Darnold confirmed he has a sprained AC joint in his shoulder, which is a fancy way of saying his shoulder is separated. When asked if it’s a first-degree sprain — the mildest form — he hedged, claiming he didn’t know. Of course he knows.

Quarterbacks can play with a first degree AC joint sprain in their throwing shoulder. They can manage the pain during the week and take a pain-killing shot on Sunday. Observing from afar, David Chao, a former longtime NFL team doctor, said he expects Darnold to be medically cleared to start against the Cardinals, especially with an extra three days’ rest from the mini-bye. This is assuming it’s a first-degree sprain. Chao acknowledged there could be some gray area in a decision like this, meaning team record, experience level of the quarterback, etc.

A Long Island-based orthopedist, Eric Freeman, offered a more conservative take, saying, “The typical treatment is rest for a couple of weeks and ease into play.”

The feeling from the Jets is they will evaluate Darnold on Wednesday, determining if he can practice. Practice is important. We’re not talking about a 10-year veteran here. Darnold has 30 career starts and has yet to face the Cardinals, which means unfamiliar personnel and schemes. If he misses practice time, the sense is they will start Flacco, who was signed for situations just like this.

Darnold, injured in last Thursday night’s loss to the Denver Broncos, said his shoulder “keeps getting better every day. I’m excited to see where my progress is come Wednesday, and we’ll see what we do there.” He already has missed six of 36 games in his career, and he doesn’t want to become known as injury-prone. As he said, “The best ability as a quarterback is your availability.” 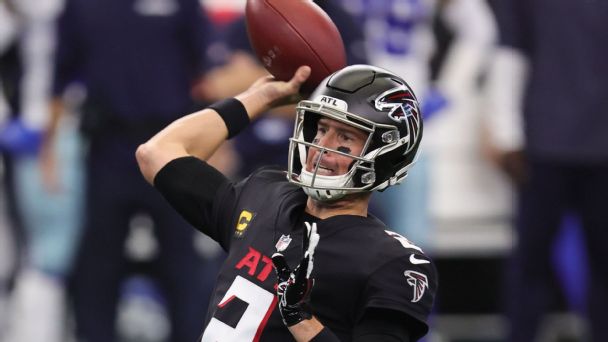 The Jets have gained notoriety for injury-related decisions over the past couple of seasons, going back to the Kelechi Osemele mess from last fall. The latest questionable choice occurred last Thursday, when rookie left tackle Mekhi Becton — listed as an “emergency” backup because of a previous left shoulder injury — was inserted into the game when Chuma Edoga went down with a shoulder injury after only four plays.

They skipped over backup Conor McDermott and went right to Becton, who played with a brace on his injured shoulder. One source called it a capsule injury, which often means a torn labrum as well, doctors said. The team hasn’t revealed the nature of the injury. Either way, it was an unnecessary and reckless decision to play Becton, a rising star who lasted 16 plays because the pain became too much.

That it’s his left shoulder is significant. As a left tackle, that’s his outside shoulder, and he needs full extension and strength in his left arm to handle edge rushers. A one-armed left tackle is a great way to endanger your quarterback. If Becton plays Sunday, he probably will be compromised. If he doesn’t play, it’s a huge dropoff to his backup.

A sore-armed left tackling blocking for a sore-armed quarterback is not a great combo. In this case, the left tackle will be responsible for Jones, one of the NFL’s most prolific pass-rushers.

Jones has a three-game sack drought. There’s no reason for the Jets to tempt fate.

Adam Silver wants fans at NBA games in 2021, but experts are doubtful