RENTON, Wash. — If you ask DK Metcalf, four games into an NFL season isn’t too early to be talking about the league’s Most Valuable Player.

No one even had to ask him after the game Sunday. The Seattle Seahawks‘ wide receiver was midway through a response about his offseason work with Russell Wilson when he stopped to give his quarterback an unsolicited endorsement:

“Just look at his stats,” Metcalf said when asked about Wilson’s case for MVP. “He’s thrown for 300-plus yards I think in every game. He has a boatload of touchdowns. He only has two picks — I’m sorry for one of them that he threw today. But his stats speak for themselves.” 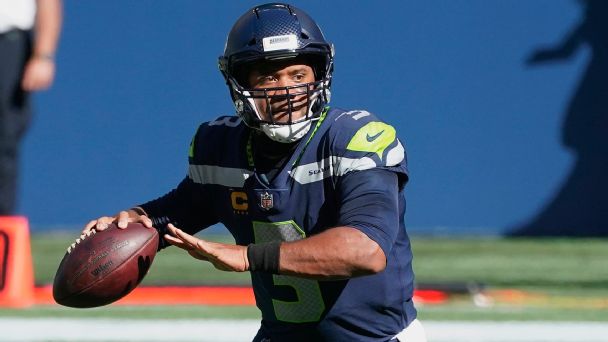 One week after breaking the NFL record for touchdown passes through the first three games of a season, Wilson tied the four-game mark with 16 in Seattle’s win over the Miami Dolphins. He also has a 75.2% completion rate, averages 9.4 yards per attempt — also league bests — and a 4-0 record. All of that makes him the clear front-runner for MVP with a chance to strengthen his case in front of a national audience when the Seahawks host the Minnesota Vikings on Sunday night.

Wilson was in the same position early last season before Lamar Jackson pulled away in the second half. When the Baltimore Ravens‘ quarterback unanimously won the MVP, it continued a notable trend: Not only is Wilson seeking his first MVP award, he’s yet to receive a single vote in eight seasons.

That’s partly a function of the voting process. The NFL’s MVP is determined by a panel of 50 voters, half the number of voters who determine the NBA’s version of the award. And the NFL ballot asks for a single pick for MVP as opposed to five in the NBA and 10 for each league in MLB.

There has also been some bad luck involved. Wilson’s best seasons have come either in years where other quarterbacks were simply better or the Seahawks weren’t good enough.

His first season with MVP-caliber numbers was 2015, a year in which the 10-6 Seahawks claimed a wild-card berth after finishing three games behind the Arizona Cardinals in the NFC West. Wilson’s 34 touchdown passes were two shy of Tom Brady‘s league lead and one behind Cam Newton, who won the award going away after leading the Carolina Panthers to a 15-1 record. The only two votes that weren’t cast for Newton went to Brady (12-4) and Carson Palmer (13-3), who had similar TD numbers to Wilson but more wins.

Wilson might have been the league’s most valuable player in the truest sense in 2017, but not the one that tends to matter to voters. He led the league with 34 touchdown passes and accounted for 37 of the Seahawks’ 38 offensive TDs as well as 86% of their scrimmage yards, an NFL record for a single player in the Super Bowl era.

Russell Wilson has been in the MVP conversation several times but has yet to receive a single MVP vote over his first eight NFL seasons. Here’s who have:

But all the MVP buzz he generated while carrying a team that had virtually no running game and a defense that was starting to decline meant nothing when the Seahawks finished 9-7 and missed the playoffs. Brady (13-3) again had team success on his side, as did the other two who received MVP votes: Todd Gurley II (11-5) and Carson Wentz (13-3).

Wilson might have gotten more MVP attention in 2018 had Patrick Mahomes not burst onto the scene with 50 touchdown passes, 15 more than Wilson. Drew Brees fell short of Wilson in that department but topped him in every other one — including wins, 13 to 10 — and thus received all of the MVP votes that didn’t go to Mahomes.

Since Wilson entered the league in 2012, only five times has a player received an MVP vote on a team that won fewer than 12 games, illustrating the weight that team success carries in voting. Seattle hasn’t topped 11 wins since 2014.

But still, some of the names among the 19 players who have received an MVP vote in that span stand out when considering that Wilson — one of the best quarterbacks of his era and a player on a Hall of Fame trajectory — isn’t among them. The list includes DeMarco Murray and Derek Carr. Wilson’s teammate, Bobby Wagner, famously got one from Tony Dungy in 2014, when he missed five games and was named a first-team All-Pro.

“I don’t want a vote,” Wilson said earlier this season. “I think more importantly, I want to win. Obviously, MVP is a special award.”

Here’s why this could be Wilson’s year: Seattle arguably has the best collection of players it’s had in his career, a group that will gain more firepower when Phillip Dorsett returns from injured reserve and Josh Gordon is reinstated from his suspension. The Seahawks are letting Wilson throw the ball as much as they ever have under coach Pete Carroll. That’s been by design, but it could continue out of necessity if Seattle’s shaky defense doesn’t improve. Even with their struggles on that side of the ball, the Seahawks are unbeaten.

It’s all the ingredients of an MVP season, including the most important one: a quarterback playing better than anyone else.

“I want to be regarded as the best to ever play this game, to be honest with you,” Wilson said. “I think it’s part of the process and hopefully I can win enough games and do enough special things as a team to be able to do that. It’s a team award really, I think, in terms of the MVP. It’s really a special award because everybody’s involved in it. Hopefully I can be a part of that and hopefully we can be a part of that as a team.”

Watkins Glen prepares for tourists as NASCAR event gets closer

Betting on NASCAR for Beginners

Aric Almirola Is A Funded Driver With A Knack For Restarts